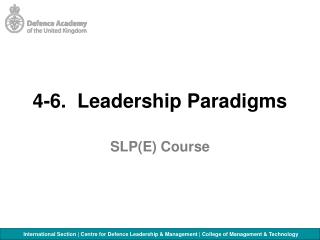 LEADERSHIP PARADIGMS - . an extremely important consideration in our understanding of leadership is the situation in

PARADIGMS - . these are frames of reference that are used for understanding things different paradigms suggest different

Paradigms - . positivism. based on the philosophical ideas of the french philosopher august comte, he emphasized

Paradigms - . perceptions about the way things are the way you see something, your point of view, frame of reference or

Paradigms - . why study paradigms. concerns how can an interactive system be developed to ensure its usability? how

Paradigms - A paradigm is a pattern or model for interpreting information. paradigms provide a set of rules and

Paradigms - . augsburg college nur 306 week one. a paradigm is…. a framework of thought a scheme for understanding and

Week 6 Leadership - . goals. characteristics of effective leaders. its up to you work on these. leadership styles. most

Dealing with Opposition to Leadership Nehemiah 4 -6 - . we are all leaders in one area or another. every husband is a

Chapter 4: Leadership - . what is leadership?. definition: the act of influencing, or guiding the activities of a

6 Deadly Leadership Mistakes - Even the most effective leaders have flaws and make mistakes. unfortunately, many leaders