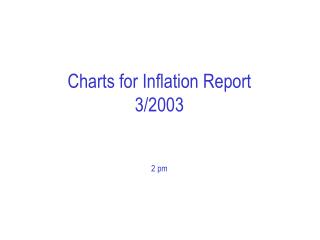 Charts for Inflation Report 3/2003 2 pm. Summary. Chart 1 Projections for the CPI-ATE and the output gap 1) . Per cent. CPI-ATE. Output gap. 1) The output gap is a measure of the difference between actual and trend output. See box in IR 1/03. Sources: Statistics Norway and Norges Bank.

4up Charts and Examples - . slide 1 4up chart template. status. red. yellow. green. what who when. esg-airside purchases

Session 1 Nautical Charts - . even though you have taken a navigation course before…. …you will probably learn some

Pedigree Charts - . the family tree of genetics. pedigree charts. i. ii. iii. overview. what is a pedigree? definition

Heisler Charts - . general methodology for using the charts in chapter 18: use a plane wall of thickness 2l as an example