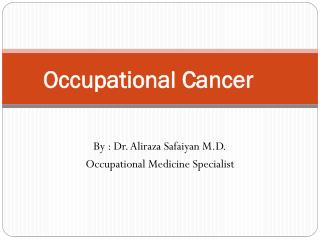 Occupational Cancer. By : Dr. Aliraza Safaiyan M.D. Occupational M edicine S pecialist. Introduction . One of every two or three individuals in the industrialized world will develop some type of cancer during their lifetimes Cancer as an Occupational Illness - Toxic environment is a big reason of occupational illness. if you are suffering from

OCCUPATIONAL HEALTH - Who are we?. suzanne

Occupational Therapy - . mike marchionne parents. the main focus of an occupational therapist is to rehab the patient so