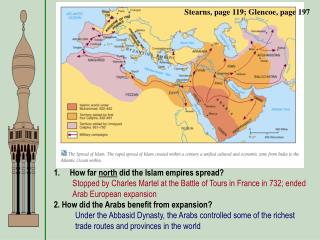 Stearns, page 119; Glencoe, page 197. How far north did the Islam empires spread? 2. How did the Arabs benefit from expansion?. Stopped by Charles Martel at the Battle of Tours in France in 732; ended Arab European expansion. The 17-Point Landing Page Optimization Checklist - Since the beginning to the online sale, a landing page has always been

DIBELS Next - . dynamic indicators of basic early literacy skills. dibels next. dibels next is based on new research

MARKSMANSHIP PRINCIPLES - . previous page. home page. help. next page. “ you have been trained to take your place as a

Assessing Google as a Teaching &amp; Research Tool - Google also caches the results of its searches. ... in essence,

Appendix 1: Table of Contents - . progress is possible page 2 the government’s obligation page 6 steps to fixing the

glencoe - Chapter resources. click on one of the following icons to go to that resource. glencoe.com. image bank.