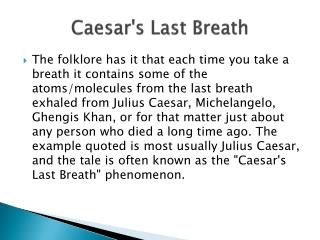 Breath in, Breath out - . created by: danny dimarco, jack dillon, delaney zugelder, and rebecca moorman. how it

Breath/Breathe - . breath – (noun) air inhaled or exhaled as she read over my shoulder, i could feel her breath on the

The Breath - . preparing ourselves for music and movement. the dart. fast airflow, narrow air passage, articulate with

Bad Breath - Is a problem which is faced by almost

Breath It In!! - . the earths atmosphere what will happen in the future if we don’t change ? aoi: environments.