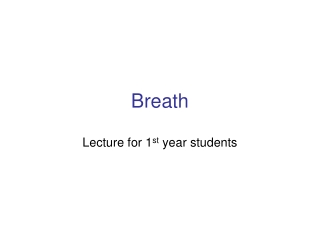 Breath Support and Control - What is breath support?. relationship in tension between the muscles of inhalation and

How a Breath is Delivered - . chapter 4. method of breath delivery:. what energy is required to deliver the breath and is

Pranayama - . definition. commonly thought to be restriction and control of the breath according to desikachar: attention

Until My Breath Runs Dry - . all of my life, all of my days i will worship you the same i give you my heart, i give you

How does breath effect dance? - . *discuss the importance of breath to life. *every part of the body needs oxygen, which

SHORTNESS OF BREATH - . dr arjan verdi. what is sob?. the subjective symptom of breathlessness essentially means that the

5 Easy Ways to Control Bad Breath - Having good oral health may provide several health benefits for your body. most of