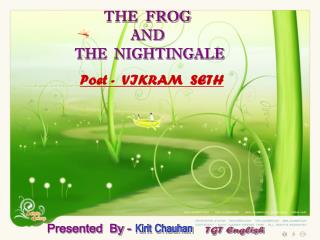 THE FROG AND THE NIGHTINGALE by Vikram Seth - . presentation by kiran tiwari tgt english. the poet. vikram seth was born

Dr VIKRAM SARABHAI - . pre-reading task. a. recollect the past five years in your life. think of the most important event