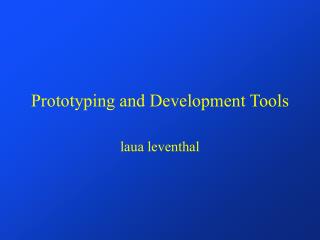 Prototyping and Development Tools. laua leventhal. Reference. Chapter 13 in protobook. Why Discuss Prototyping Here?. Iteration is an integral part of the UI lifecycle Prototyping is our mechanism for iteration GUI builders can be used as prototyping tools. Introduction.