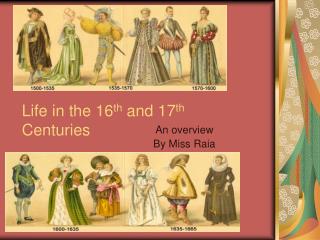 Life in the 16 th and 17 th Centuries. An overview By Miss Raia. Social Hierarchy. Countryside Manorial Lords were at the top Peasants constituted the largest percentage of the rural population Many owned land Landless workers earned the lowest wages Towns What Christmas traditions began in the 16 th / 17 th centuries? - . what do you notice about these traditions? http ://

The Southern Colonies in the 17 th and 18 th Centuries - . jamestown founded. first africans arrive in jamestown.

The New Monarchies : 15 th – 16 th Centuries - . note to. characteristics of the growth of the new

European State Consolidation in the 17 th and 18 th Centuries! - . the netherlands: golden age to decline. the

Absolutism in France (In the 17 th &amp; 18 th centuries) - . absolutism=form of gov’t. where one ruler has

Chapter 14: New Directions of Thought and Culture in the 16 th and 17 th Centuries - . leaders of the scientific

The Renaissance 15 th_ 17 th centuries - . elements of literature pages 192-212. what was the renaissance?. beginning in