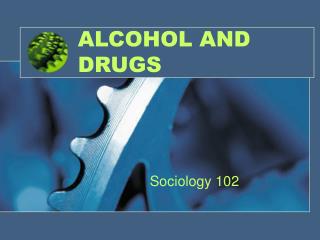 ALCOHOL AND DRUGS. Sociology 102. From a pharmacological viewpoint a drug is any substance other than food that alters the structure and function of an organism Medical definition - substance used to prevent or treat a disease DRUGS AND ALCOHOL - Drugs and

Alcohol and Drugs - . effects and dangers. homework :. what health problems are associated with drinking alcohol?

Drugs and Alcohol - . live and let live share by : bria riley. caffeine. caffeine is the most common drug used in

Drugs and Alcohol - . what is the most commonly used in nl?. alcohol tobacco cannabis alcohol is the most popular amongst

Drugs and Alcohol - . over the counter drugs. what is a drug?. definition: a substance that has a physiological effect

Alcohol, Tobacco, and Drugs - . mr. ramos. lesson 1: following guidelines for the use of medicine. objectives: explain

Alcohol, Drugs and Tobacco - . what you’ll learn. 1. list and explain factors that influence the effects a drug will

Alcohol and Other Drugs - Vmi annual employee &amp; cadet training 2013. alcohol and other drugs. the annual

Drugs, Alcohol, and Smoking - . michael harris noah whicker jorge rodriguez. drugs. a drug is any substance that when

Alcohol and Other Drugs - . prevention and intervention. prevention. most efforts directed at young people rates of

Drugs and Alcohol “Teenagers” - . jim bradley. what is a drug?. can be defined in many ways. substance used to treat