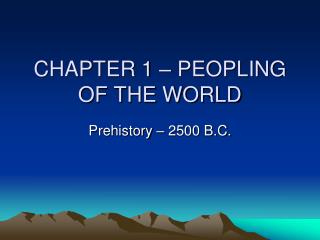 Chapter 15: The West and the Changing World Balance - . ap world history ii. key concepts…. the decline of the arab

Chapter 1: The World of Geography - . chapter 1: what is geography? * it is the study of our earth; our home. or

Chapter 2 The Evolution of World Politics - . this chapter has two goals: 1- general background on the most important

Chapter 10 World War I - . #1 outbreak of world war i. essential question: what caused world war i? why was the u.s.

Peopling The Land - . an introduction. from africa?. some believe that humans in the new world have come from africa. the

Chapter 13 A World in Flames - . 13.1 world dictators and america. the rise of dictators after wwi. the treaty of

Chapter 28 - Descent into the abyss: world war i and the crisis of the european global order i) the coming of the great

Chapter 37 - . the aftermath of world war ii. world bank. was created to provide money for countries to recover and

The peopling project - . by : isabelle jones. my grandpa ate ham, chicken, oatmeal, and fresh fruit and he dressed like

Chapter 26 - . the united states in a troubled world 1920-1941. introduction after world war i, america assumed an