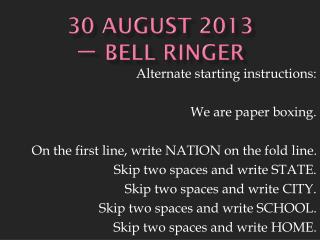 BELL RINGER 1.3.2013 - . take out your reading notes to be checked. if you did any extra credit work, take them out to be

Thursday’s Bell Ringer - . a considerable amount of heat is required for the decomposition of aluminum oxide. 2al 2 o

BELL RINGER 1.9.2012 - . take out your reading assignment and dream log projects to turn in. if you did any extra credit

Bell ringer 8.14 - . please have agenda on table. please write down 5 questions. use map on page 121 to answer questions.

Bell Ringer - Ssush13 : the student will identify major efforts to reform american society and politics in the

Bell Ringer - . get out your notebook and prepare to take notes on chapter 9 convert your height to inches and be