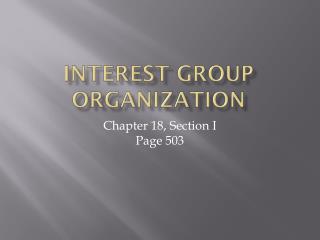 Special Interest Group - . open forum to discuss lean progression and reflect on the results. agenda. why are we here:

Interest Group Review - . what is the pluralist theory?. what is a pac?. why have pacs increased since 1970’s?. what is

CQJS Interest group: - . our argument :. we are against the proposed route for the highway. we believe it will definitely

INTEREST GROUP “ANY ORGANIZATION THAT SEEKS TO INFLUENCE PUBLIC POLICY” - . let’s take a look at one. interest

Detector group organization - . for the cdr writing we had identified subsystem editors/conveners this structure has

Taxonomic Literature Interest Group - . meeting outcomes general agreement that we should move forward with 3 levels of