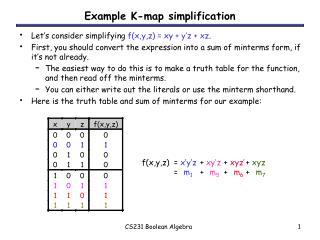 Example K-map simplification . Let’s consider simplifying f(x,y,z) = xy + y’z + xz . First, you should convert the expression into a sum of minterms form, if it’s not already. The easiest way to do this is to make a truth table for the function, and then read off the minterms. Example TIP &amp; Route map - . instructions on how to open the embedded excel file are on the next slide. right