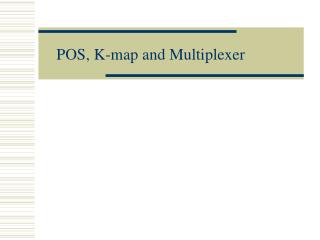 POS, K-map and Multiplexer. Karnaugh maps. Last time we saw applications of Boolean logic to circuit design. The basic Boolean operations are AND, OR and NOT. These operations can be combined to form complex expressions, which can also be directly translated into a hardware circuit.

Multiplexer and DeMultiplexer - . multiplexer (data selectors). the term ‘multiplex’ means “many into one”.

The Multiplexer - . multi what?. http://en.wikipedia.org/wiki/file:multiplexer_8-to-1.svg. the multiplexer or mux. is

EXPRESSION OF FORM - . architecture is a thing of art, a phenomenon of the emotions , lying outside questions of