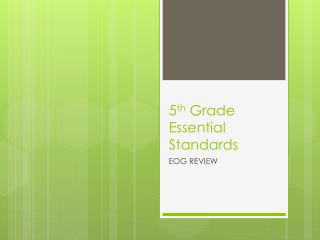 5 th Grade Essential Standards. EOG REVIEW. Which best describes how a ball is able to be thrown up into the air?. a. The force of gravity is greater than the force needed to throw the ball up into the air. Teaching in a Standards-Based Math Classroom – June 2012 - . curriculum and instruction division of mathematics,

Sailing the Seas of BDS CCSS Math K-5 - . our objectives:. to increase k-5 teachers understanding of the mathematical

Standards - . where we came from and where we are going. function of standards f( s t ) = c 2. dr. brennon sapp october