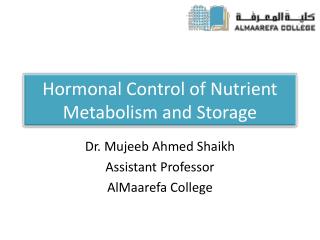 Metabolism - . definitions…. metabolism – the sum of all the chemical processes whereby _______ is made available and

Bone Physiology, Hormonal Control of Calcium Metabolism, and Osteoporosis - . bone physiology. the skeleton has the

Biochemistry and Metabolism - . the course will cover: enzymes – kinetics and control control of metabolism control of