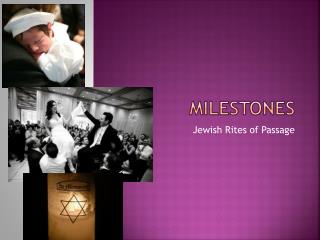 MILESTONES. Jewish Rites of Passage. BIRTH AND CIRCUMSISION. Jewish Tradition. Known as “Brit Malah ” Babies given a conventional name and a formal Hebrew name Jewish boys circumcised on the eighth day after birth Ceremony performed by a “ mohel ” Names given at this time MILESTONES - . islam rituals and celebrations. early life. muslims believe that a child is born free of sin born with an