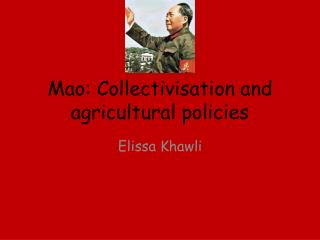 Mao: Collectivisation and agricultural policies. Elissa Khawli. Historical Background of the agriculture in China. Private land ownerships and one-family farms. Early 1950’s, the CCP was planning to improve then eliminate this system.

The FFA - . what’s in ffa for me?. the three parts of agricultural education classroom/laboratory the ffa supervised

For The Annual Conference of the American Society of Agricultural Consultants - . embassy suites (at the airport) st.

AGROECOSYSTEMS - . agroecosystem. a community of living organisms, together with the physical resources that sustain

Agricultural Biotechnology in India - . sanjay saxena. “transgenics” or gmos are defined as those organisms with a

Agricultural Animal Welfare - . does agriculture improve the welfare of animals…?. …or cause unnecessary suffering?.

Chapter 3. DEMAND, SUPPLY, AND MARKET EQUILIBRIUM - Significance. the tools of demand and supply can be applied to a

Balance of Payments Adjustment Policies - . policies to correct a bop imbalance. most discussions focus on countries