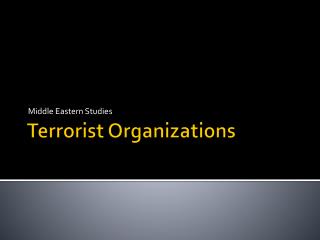 International Terrorist Organizations - . by andrew chase. what is

Terrorist - . what is terrorism? do both sides practice it? how/when/who?

Terrorist Mentality - . dr. mick maurer. there are 109 different definitions of terrorism by leading academics in the

Terrorist Takeovers - . a growing threat. what we are dealing with???. mumbai. mumbai. history. there have been a couple