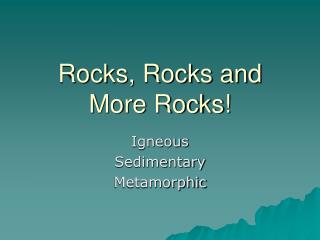 Stratigraphic Facies and Geologic Time - . amantz gressley, 1834, and the jurassic rocks of the jura mountains between

Chapter 3 The Rock and Fossil Record Section 1: Earth’s Story and Those Who Listened - Do now: discuss with your table:

METAMORPHISM AND METAMORPHIC ROCKS - . common metamorphic rocks. classified on the presence or absence of foliation .