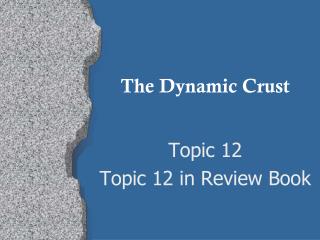 The Dynamic Crust. Topic 12 Topic 12 in Review Book. I. Evidence of Crustal Motion. Original horizontality A concept that assumes that sedimentary rocks (and some igneous rocks) form in horizontal layers parallel to Earth’s surface. These horizontal rock layers are called strata

Earth’s Crust - . by amy calleja. earth is made up of many different rocks. there is the crust, the mantle, the outer

The Earth’s Crust - . plates. the earth’s crust is broken into several large slabs of rock called plates each plate

The earths Shifting Crust - . fault line. a line of weakness in the rocks of the earth’s crust. continental drift

Deforming the Earth’s Crust - Deformation. - the process by which the shape of a rock changes because of stress is

Minerals of the Earth’s Crust - . chapter 1. what is a mineral?. section 1 vocabulary mineral element compound crystal

Growth of the Continental Crust - . lecture 48 . age of the crust. the oceanic crust is ephemeral; its mean age is 60

Movement of the Earth’s Crust - . earth’s changing surface. there are two major sections of the crust: the