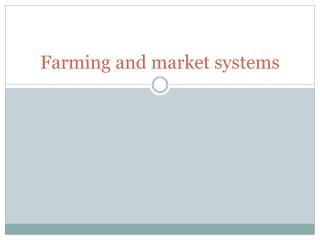 FARMING SYSTEMS - . in the developing world. the term. farming systems refers to an ordered combination of crops grown,

Systems Model and Farming - . what is the systems model?. systems model is a model of looking at any system (farming, oil

Vertical Farming Market: By Farming Type - The vertical farming has transform the modern agricultural practice with its

Vertical Farming Market - Global vertical farming market was valued at $1,782 million in 2017, and is projected to reach