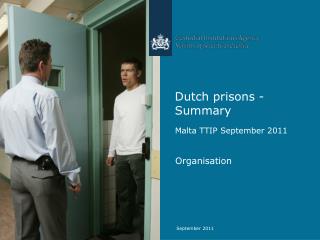 Dutch prisons - Summary. Malta TTIP September 2011. Organisation. Custodial Institutions Agency - DJI. If a Dutch court imposes a sentence or custodial measure, the Ministry of Security and Justice is responsible for the enforcement of the sentence or measure. THE DUTCH REPUBLIC - “the dutch suffered from an embarrassment of riches. dutch wealth clashed with the calvinist

The Commission on Safety and Abuse in America’s Prisons - . summary of the commission’s