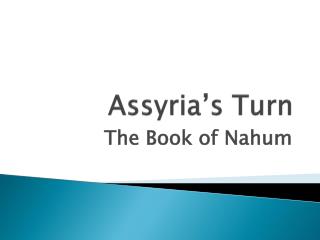 Warm Up- - . what is an empire? it is a large territory where several groups of people are ruled by a single powerful

Palestine - . egypt. media. babylonia. persia. lydia. the intertestamental period. 430 bc to 4 bc. the roots of late ot

Rotations - . rotations are when one object moves to another place. it’s almost like when you rotate to different

ASSYRIA: The Rise and Fall of an Empire - A powerpoint experience by: aleks jaunzemis, jameer green, paul gloth , and

GOD’S PROPHETS AND PROPHECIES - . jonah and nahum – prophets to nineveh. understanding of assyria and nineveh.

ASH WEDNESDAY 2009 - . o jesus, you place on my forehead the sign of your saving cross: &quot;turn from sin and be

5-3 Notes: Assyria &amp; Babylonia - . what is an empire?. an empire is a group of lands and different peoples that

Turn the dial 3 times to the   right , stop on the first number. Next, turn the dial one full - Turn to the left ,