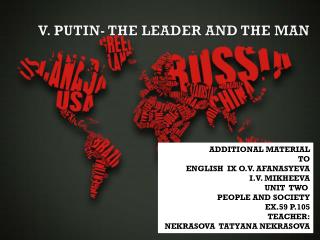 The CLLD/Leader and the Leader Cooperation - . participatory local development strategies: + leader for 2014-2020

Putin and Obama - And. putin and obama.

“The Highway” and “The Man” - Describe with your neighbor what the common theme is between these two stories?

The Man and The Echo - . w.b. yeats. analysing the poem. the title multiple readings reading it out loud notes on what it

The Man and The Echo - . by william butler yeats. read these extracts from the poem. ….all that i have said and done

The Leader and Change - . effective leadership individuals and change leading change teams. what is change