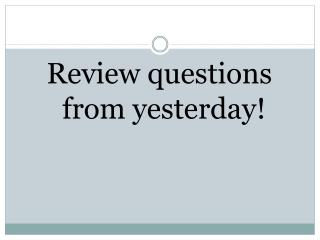 Review questions from yesterday!. ________________________ disorder is a type of anxiety disorder. It can occur after you've seen or experienced an event that involved the threat of injury or death. OGT Review Questions You will need: Periodic Table Scratch Paper A calculator? Teamwork - Keep in mind, the questions do

Social Studies GHSGT Review - . where every minute counts!. chapter 1 and 2 practice questions. read and answer the

8 th Social Studies CRT Review Questions from SDE - . the idea expressed by president lincoln in the quotation below is

EECC551 Exam Review - . 4 questions out of 6 questions (must answer first 2 questions and 2 from remaining 4) instruction

Review of yesterday - . mini-reports. do check the example file. name the file appropriately. give a suitable informative

Review Sheet - . go through and answer all the questions on your own time. do not wait until the last minute to do this

Regents Review - . what you should know!!!. what to expect…. 50 multiple choice questions thematic essay dbq questions

Review Questions - . foods 2: please copy the question and answer it as a group. remember do not let other groups hear