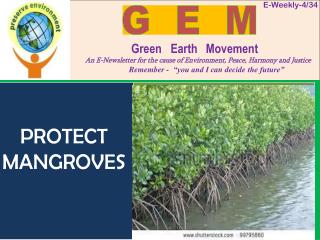 G E M. Mangroves are one of the coastal natural phenomena seen in river mouth zones in subtropical areas. They can been found on muddy "wetlands" of loose and moist soil. They are among the richest eco-systems in terms of natural resources. Mangroves are buffers b etween the land and the