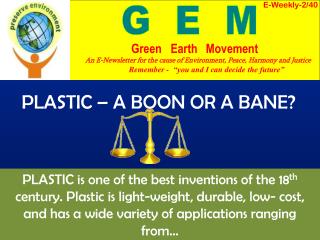 G E M. PLASTIC – A BOON OR A BANE?. PLASTIC is one of the best inventions of the 18 th century. Plastic is light-weight, durable, low- cost, and has a wide variety of applications ranging from…. a pen, waste paper basket, bottles, shopping bags, kids’ toys, household