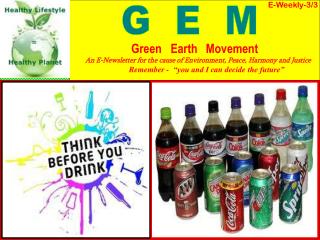 G E M. A ‘FASHION’ AMONG YOUTH Soft drinks are today's trend or much better, you can call them 'fashion' especially among the youth. Do you know that this colorful liquid does not do a bit good to you? Instead, they add up dangerous toxins to your body. Soft drink (also called soda,