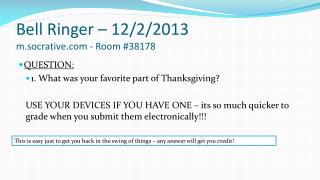 Bell Ringer – 12/2/2013 m.socrative.com - Room #38178. QUESTION: 1. What was your favorite part of Thanksgiving? USE YOUR DEVICES IF YOU HAVE ONE – its so much quicker to grade when you submit them electronically!!!. Standard 2 - . part 2: how ecosystems work. bell ringer, 9/4. get your tribe points get out your squirrel island hand out

Reading Bell Ringer Tuesday, November 9, 2010 - . think about the last time you asked someone to do something for you

Bell-ringer: 11/13/12: Review of Vocab - . copy and complete the following sentences using the word bank: a. requiem b.