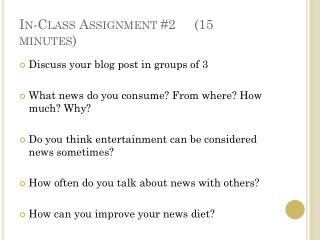 In-Class Assignment #2 (15 minutes). Discuss your blog post in groups of 3 What news do you consume? From where? How much? Why? Do you think entertainment can be considered news sometimes? How often do you talk about news with others? How can you improve your news diet?. In-Class Assignment #19 - . discussion of international news websites what did you find different across the sites? what

Week 3 In-class Assignment 2 - . michelle olson has been a runner since high school, and had participated in numerous