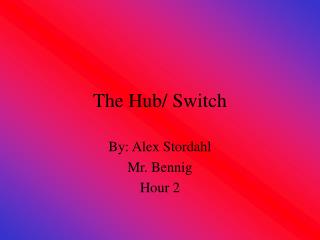 The Hub/ Switch. By: Alex Stordahl Mr. Bennig Hour 2. What is a hub? What is a switch?. Switch is a small hardware device that joins multiple computers together within one local area network (LAN) The KARST Hub in the - . tn stem innovation network. and its platform school, the l&amp;n stem academy, knoxville,

The Property Hub - How to structure the ownership of your r ental p roperty. the property hub. amanda watt – whk. brief

The Hub logo installed from The Hub Resource CD - . the hub is a teen community social center located in the heart of

Introduction to the Hub - . objectives that will be covered; accessing the hub downloading a community from the hub

The Hub - . the hub us a teen community social center located in the heart of austin, text. the hub gives teens a safe

The Hub! - . the hub is a teen community social center located in the heart of austin, texas. the hub gives teens a safe

the hub / Discovery - . feb-march 2/14. in febuary -march we talked to 15 people who work at ebay. talked to users about