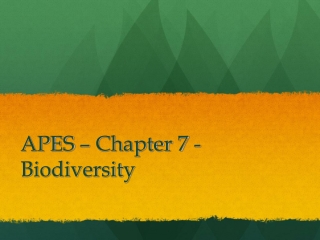 APES – Chapter 7 - Biodiversity. Definition. The diversity of life forms in the environment 3 scales within a region A) ecosystem B) species C) genetic. Species diversity varies among ecosystems. How many species live on Earth?. 2 million named to date Chapter 11 Biodiversity: Preserving Species - . 11.1 biodiversity and the species concept . what is biodiversity? what

Biodiversity - . mcneely (1988) defined “biodiversity is a comprehensive word for the degree of nature’s variety,

Sustaining Aquatic Biodiversity - Chapter overview questions. what do we know about aquatic biodiversity, and what is its

Biodiversity and Change - . the syllabus says:. explain the concept and importance of biodiversity in tropical

CONSERVATION OF BIODIVERSITY - . what is biodiversity ??. biodiversity is the degree of variation of life forms within a

Why study biodiversity, ecology, and conservation biology? What is biodiversity - How do biologists organize