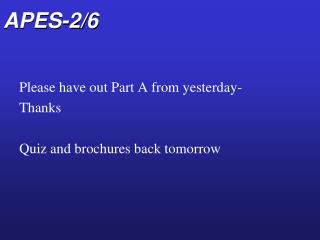 APES-2/6. Please have out Part A from yesterday- Thanks Quiz and brochures back tomorrow. Loss of Species How have human activities affected the earth’s biodiversity? How can we protect and sustain biodiversity?. Ecological Intelligence. APES Chapter #2 - . environmental history: learning from the past. cultural changes and the environment human history.

KILLER APES - Basic model. humans evolved from murderous apesmurder and violence are deep in our naturefirst proposed by

APES - . get out air pollution lab get out superfund poster – staple rubric to the bottom (so we see both the poster

Welcome to APES! - . mrs. gahan room 126 aces academy. what should i do when i get to class?. turn your homework into the

APES math problems - . creating a systematic approach to max out your points!. i have 3 eeps. how many taps is that?. 1