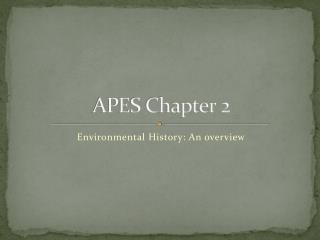 APES Chapter 2. Environmental History: An overview. Cultural Changes and Sustainability. What major Human Cultural Changes have taken place? Age of our solar system - 4.6 billion years Homo sapiens sapiens have been on Earth for 60,000 years. The Evolution of Human Culture:. APES – Chapter 7 - Biodiversity - . definition. the diversity of life forms in the environment 3 scales within a

APES UNIT 2: ECOLOGY - . = the study of how organisms interact with each other and their environment. i. ecosystem

APES - . get out ch. 13 notes. meat!. meat production and consumption have grown steadily. animals for meat raised in