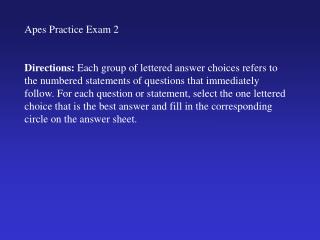 Apes Practice Exam 2 Directions: Each group of lettered answer choices refers to the numbered statements of questions that immediately follow. For each question or statement, select the one lettered choice that is the best answer and fill in the corresponding circle on the answer sheet. APES Practice Exam 1 - . questions 1-5 refer to the structure of the atmosphere. (a) troposphere (b) stratosphere

Exam 2 Practice Test - . i. translating statements in english to propositional logic (10, 2 points each). 1. if c ats

Unit 2 Exam Practice - . unit 2: page 19 (after exercise 3 c). complete the sentences with the correct form of the words.

APES UNIT 2: ECOLOGY - . = the study of how organisms interact with each other and their environment. i. ecosystem

Exam Practice... - Exam practice. don’t let this be you. objective:. to focus on the structure of (a) and (d) type

Exam Practice - . lo: to create revision posters. writing to persuade. for the first ten minutes you are going to be

Practice Exam - . lucky versus resort homes. lucky: * sent only 200, could contract with each * section 24: no further