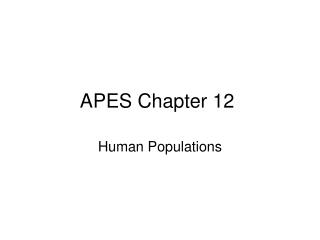 APES- 12/5 - . please have out your rabbit and wolves activity and your chapter 9 notes permission slips anyone? remember

APES – Chapter 7 - Biodiversity - . definition. the diversity of life forms in the environment 3 scales within a

APES - . get out ch. 13 notes. meat!. meat production and consumption have grown steadily. animals for meat raised in