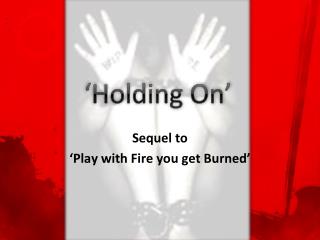 ‘Holding On’. Sequel to ‘Play with Fire you get Burned’. Summary . Structure of Congress - . objective: understand how congress is organized bell ringer: list the qualifications for

Planning for Deformable Parts - . holding deformable parts. how can we plan holding of deformable objects?. deformable

Pneumatics - Use - . some examples of everyday pneumatic systems are shown below. how many do you recognise?. pneumatics

The Iceman Otzi - . introduction. otzi is a well-preserved natural mummy of a chalcolithic (copper age) man from about

COMMUNICATION STRATEGIES - . learning objectives. identify common communication problems that may be holding you back

All To You - . you called me lord you know my name i'm standing now i'm not ashamed i've searched and came up empty this

THE NEWBORN - . “i had heard about the negatives---the fatigue, the loneliness, loss of self. but nobody told me about

Chapter 9 - . cash and marketable securities management. after studying chapter 9, you should be able to:. list and