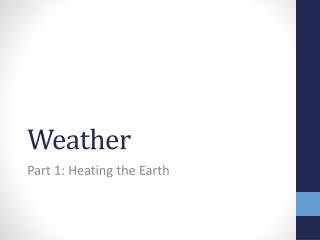 Weather. Part 1: Heating the Earth. Weather is…. the daily condition of the Earth’s atmosphere. caused by the interaction of heat energy, air pressure, wind, and moisture. studied by meteorologists. . How Does Heat Energy Move?. Conduction: the movement of heat by direct contact