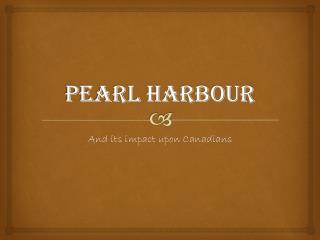 Pearl Harbour. And its impact upon Canadians. Prologue. During World War 2, many of the battles that occurred affected us as Canadians. One of the most significant attacks was the bombing of Pearl Harbour. . Attack on Pearl Harbour - . by :. why pearl harbour?. pearl harbour is a lagoon harbour on the island of oahu, hawaii.

The US defeat at Pearl Harbour 7.12.1941 - . a politically motivated, self-inflicted defeat, or just us military

Harbour Pollution - . an inquiry into: how pollution affects all animal life in the sea… by: victoria thilesen py6.