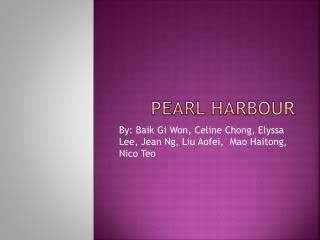 Pearl Harbour - . and its impact upon canadians. prologue. during world war 2, many of the battles that occurred affected

Attack on Pearl Harbour - . by :. why pearl harbour?. pearl harbour is a lagoon harbour on the island of oahu, hawaii.

The US defeat at Pearl Harbour 7.12.1941 - . a politically motivated, self-inflicted defeat, or just us military

Harbour Pollution - . an inquiry into: how pollution affects all animal life in the sea… by: victoria thilesen py6.