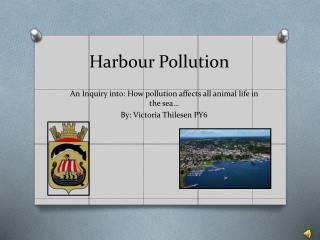 Harbour Pollution. An Inquiry into: How pollution affects all animal life in the sea… By: Victoria Thilesen PY6. Introduction…. Pollution is the introduction of contaminants into a natural environment that can cause instability, harm and discomfort to the ecosystem. Harbour Pollution In Sandefjord - . by : ludvik nordrum. an inquiry into : who is responsible for cleaning the fjord up.

Pearl Harbour - . and its impact upon canadians. prologue. during world war 2, many of the battles that occurred affected