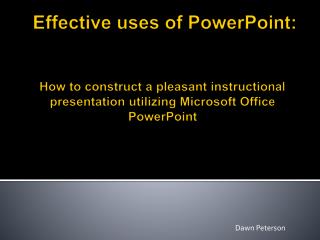 Effective uses of PowerPoint: How to construct a pleasant instructional presentation utilizing Microsoft Office PowerPoint . Dawn Peterson. #1 . Have an interesting introductory slide that is pleasant to view and draws attention towards the topic. Dawn - Waiting for their spaceships to come in… …with help from hubble in the meanwhile. dawn. new horizons. pluto

Peterson Grabber - . bottom seeker that gets items off the ocean floor. the peterson grabber is used to gather sediment

Peterson Grabber - . -the peterson grabber is for biting down into hard bottoms and collect macroscopic fauna in sand,