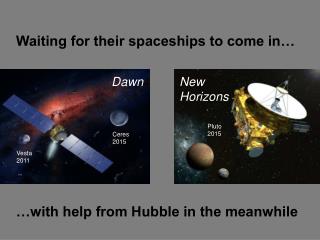 Waiting for their spaceships to come in… …with help from Hubble in the meanwhile. Dawn. New Horizons. Pluto 2015. Ceres 2015. Vesta 2011. Citation from IAU Minor Planet Circular 56612 on the naming of Asteroid “6815 Mutchler”. Asteroids “ready for their close-up” Max Mutchler Dawn Mission - . how do we get there?. dawn a journey to the beginning of the solar system. travel plans: dawn’s

Kayla Dawn - . cell-car. a cell is like a car because its got many parts. nucleus-front seat. the front seat in a car is

Blue Dawn - . silently sitting on the edge of a silver sink. waiting for the right hand. to release it from inside of the

Nautical Dawn - . a preamble to an aces introduction . dennis haffron. at the beginning of each new day there is a time