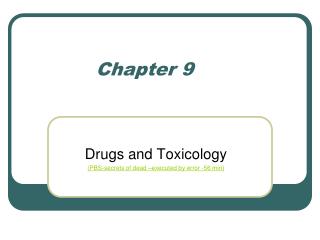 Chapter 9 . Drugs and Toxicology (PBS-secrets of dead –executed by error -56 min). A bottle of Bayer's 'Heroin'. Between 1890 and 1910 heroin was sold as a non-addictive substitute for morphine. It was also used to treat children suffering with a strong cough.