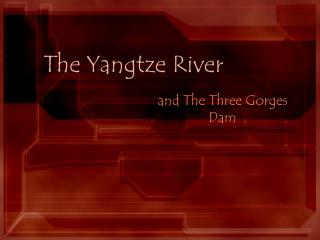 The Yangtze River. and The Three Gorges Dam. China. The world’s most populated country 1.3 billion people 90% live in the eastern ½ most major cities most suitable farmland One of the world’s largest economies, but most Chinese still live “modestly”. China. The Yangtze River - . a presentation of the third-longest river in the world. location. dangla mountain range. shanghai.

Yangtze river - . done by: shuaa al nasr 6b. what is the yangtze river? where is it

Yangtze River - . by: cao xing ye. short introduction. the yangtze river is the 3 rd longest river in the world and the

The Yangtze River in China

GREEN POWER ON THE YANGTZE RIVER - . organized by: marinedream foundation aiesec china. what is going on with the yangtze

China’s Main Rivers: The Yellow River and the Yangtze - . objective: by the end of today’s lesson you should be able