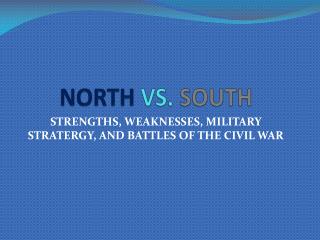 The Start of Civil War Comparison Information - . north vs. south in 1861. comparison: north &amp; the south.

North vs South Debate - . what are the issues about trade and slavery?. now north vs. south debate. now there is a north

WHY DID THE SOUTH SECEDE? - . yo, confederates!! what were you thinking?. the economic mystery. in light of economic

Differences Between the North and the South - . the north opposed slavery slavery was morally wrong. the south supported

Civilizations in the Americas - . land of the americas. - 2 continents – north and south america - 2 major mountain

Economics of the Civil War - Why fight a war you know you'll lose?. in light of the economic advantages of the north over