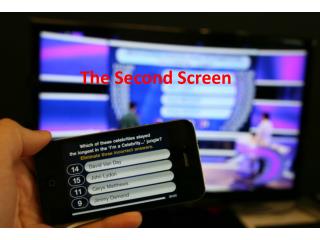 The Second Screen - . by: vanessa miranda. what is it?. an additional electronic monitor used by people while watching

The second screen in this topic provides more information about the course.

SKIP the SCREEN! - . did you know?. …kids today spend an average of over 20 hours per week in front of a screen?

The Word Screen - . the parts and what they do. document window. office assistant. title bar. program control shortcuts.

Protect the Device Screen with the Stunning Screen Protector - In the shop, you can see the different collection of

TEST THE SECOND: - . the life of a cell. and. cellular respiration. “the difference between school and life? in school,

The Second Coming - . william butler yeats. turning and turning in the widening gyre the falcon cannot hear the

The “Second Generation” - . globalization and environmental management. 2 nd generation?. this is a term coined by