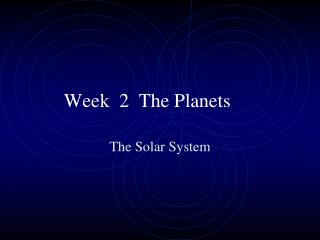 Week 2 The Planets . The Solar System. The Origin of the Solar System. ( But first…a quick look at the origin of the universe – there is MUCH more to come!) 3 minutes after the Big Bang, protons, neutrons, electrons and the other particles of matter came into existence The Inner Planets - . mercury venus earth mars. why they are called the “inner planets”. the inner planets are the

Planets - `. planets. planets. definition of a planet. an object in orbit around a star but does not give off its own

Week 4 - . comets, meteors, and asteroids the demise of pluto as a planet extra-solar planets. reading: chapter 4.1, 4.2,

Hello, Earthlings! - . the solar system. by: katherine and aditi. summary of lesson. the planets. planets are large

42 new planets discovered - . by: tobias host. what’s it all about. astronomers found 42 new planets. one of the

The Inner Planets - . lesson 4. objectives. students will be able to describe the characteristics that the inner planets

The Inner Planets - . the inner planets. mercury, venus, earth, and mars inner planets are small, dense and have rocky